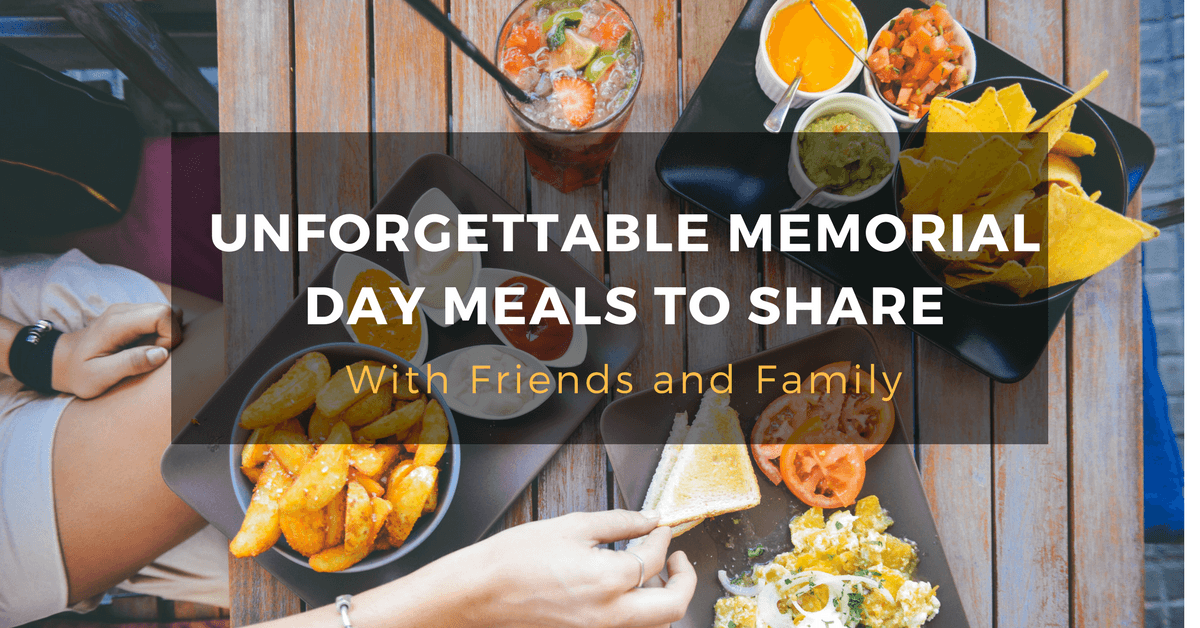 What Is your first memory of A Memorial Day weekend?

For me, it’s sitting out on the porch, sipping lemonade with my cousins, while the grown-ups were cooking up barbecue in the backyard. Ah, those were the good ol’ times!

While the majority of our neighbors saw these days as an opportunity to get away to the coast or have a picnic someplace nice, my immediate and extended family conjured at our house, ready to make culinary magic.

Even though Memorial Day is about much more than just food, the majority of Americans associate this holiday with cookouts, parties, and parades. In my mind, there is nothing wrong with that. Food brings people together in a joyful manner, in a way that no other thing in the world can.

This statement inevitably leads me to the question – what are your favorite Memorial day meals? I love asking this because the answers can vary greatly, as there is no (at least to my knowledge) particular dish that folks prepare especially for this occasion.

Thanksgiving has turkey, Christmas has ham, and Easter calls for eggs, but what about Memorial day? Well, today, I would like to offer you a few mouthwatering recipes designed for this event. No matter if you like barbecuing, cooking in the comfort of your kitchen, or just packing up a few snacks for the picnic, I've got you covered with meals for any of the options mentioned above.

Read up, see what looks good and make yours and your loved ones’ tummies happy. Now, out of respect for the true purpose of this holiday, I’d like to delve into the history of Memorial Day, just for those who might not know what it commemorates.

Memorial day is celebrated in the United States on the last Monday of May, and it honors the people who lost their lives while serving in the country’s military.

The holiday emerged after the civil war and was originally known as Decoration Day, and it wasn’t until 1971 that it became an official federal holiday. Most Americans celebrate it by having family gatherings, attending or taking part in parades, or visiting cemeteries.

After the Civil War ended in 1865, the country started establishing first national graveyards, since the quarrel took more lives than any other conflict in American history.

In the following years, Americans started going out to the cemeteries, decorating the graves, and reciting poems to the fallen. Even though the holiday is now celebrated nationwide, it is not certain where exactly it originated.

Throughout the years, Memorial day became known as the unofficial beginning of the summer season. Many people still honor the traditions, but some other, more “light-hearted” ways of celebrating it have become popular.

These ways include organizing cookouts and parties, taking weekend trips and using it as an excuse to get together with people and have a good time.

As you’ve probably noticed, I’ve already mentioned the word “barbecue” a few times in this article, and yes, I admit – I am obsessed with it. Even though I feel a little bit guilty of “blasphemy” for solely associating this day with grilled meat, I can’t help it, and I’d like to share my favorite BBQ ideas with you.

To keep it interesting, I figured it would be the best to include three of the most popular meats into the list, so as you can see there's a beef, pork, and a chicken recipe. Also, vegans, don’t think I forgot about you! Cooking at home For Memorial Day

Despite the greatness and deliciousness of barbecue, not everyone is crazy about this method of cooking. Some folks enjoy plain old stovetop and oven meals, and honestly, this way of preparing food gives you the most flexibility.

This section is for those who like to spend Memorial day in the comfort of their own homes and enjoy some nourishing, satiating meals. Instead of giving you a bunch of random recipes, I decided to compose a full-blown meal - from starter to dessert. I’m absolutely certain that you’ll enjoy this magnificent feast. Another popular way to spend Memorial Day is picnicking, and if the weather is kind, I believe that it is a great way to while away an afternoon. Now, people who want to enjoy the outdoors may not exactly have food as their priority.

However, this doesn't mean that one should settle for potato chips and peanuts. I think that you should go out of your way and prepare something scrumptious that you'll bring along to the picnic with you. Here is a list of my suggested recipes. So there you go, my ultimate guide to Memorial day meals has reached the end, and boy was it a crazy, culinary ride. The recipes that you read about were carefully chosen concerning a number of factors including the occasion and the mood that this time of the year brings.

However, I would like this article to inspire you, and even if you decide not to prepare any of the meals from my list, I hope that your interest in cooking will increase even a little bit.

I feel that Memorial day’s more joyful note should be celebrated, and that’s what I put an accent on. What I mean by joyful is the friends and family, the good food, the laughs and the drinks.

The combination of these elements can be so wonderful that one cannot be blamed when he or she forgets about the initial purpose of this holiday. With all this being said, enjoy life, and bon appétit!