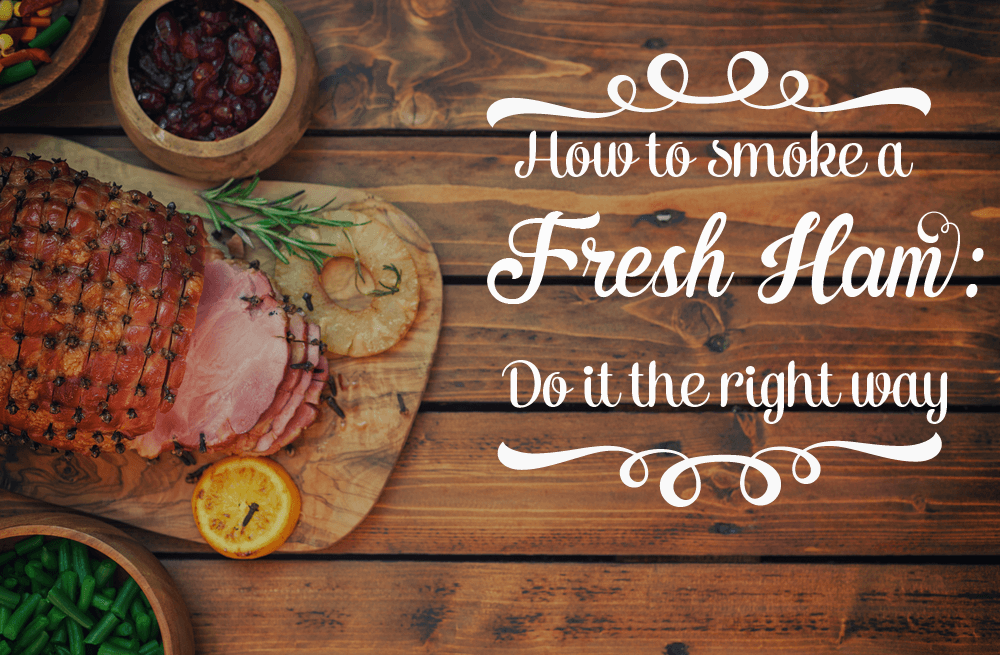 So, you’re planning to buy a fresh ham? What will you do with it, by the way? Are you going to smoke it? But, do you know how to smoke a fresh ham? At this moment, you might already be confused because of these questions but fret no more! I will be your guide if you want to smoke a fresh ham. I will help you to it the right way.

Before we proceed to smoke the fresh ham, let’s be familiar with the term ham. It is a term used for the cut of meat which consists all or the part of the hindquarters of the pig. Once it is cured or smoked, you might already think of it as the ham. However, if it is not processed, it is still referred fresh ham. And the flavor is a lot more akin to a very delicious pork roast than a salty cured meat.

You might normally find a fresh ham like a large shank roast which is in the same form as the cured ham. But, most of the time, you could find a fresh ham roast that is a thick slab cut right from the shank. Indeed, the size could be a lot manageable once you aren’t expecting to feed a small army.

Besides, the thinner size might also cook a lot faster. Ask the butcher to see if they could cut a roast for you. Or you could check some local farmers market to provide fresh ham directly from the farmer who raised the pig.

How to Smoke a Fresh Ham: The Definitive Guide

So, if you plan to smoke a fresh ham, I think you will need this guide to help you.

There is actually nothing much do but if you will smoke the entire fresh ham, you might consider to brine it first for it to stay moist. Once you don’t have enough time to do so, just follow these:

Rinse the ham then pat it dry with paper towels.

With the use of your favorite dry rub, rub the ham all over. Once the rub doesn’t have much sugar in it, you might sprinkle some brown sugar all over the fresh ham helping it to be brown and caramelize. And finally, cover the ham, let it sit out for about 30 minutes to an hour before grilling to allow it to reach its room temperature.

To cook a marvellous smoked ham, bear in mind that the smoker plays a crucial role. You might choose smokers that are powered by electricity, gas, wood or charcoal. And these options do have their advantages, so you have to choose the one that matches your needs.

For those who are using the charcoal smoker, you might have this option of adding wood chips and there is a need to do this to bring an extra level of the smoky flavor to the ham. In order to get the smoker ready, pile then light about four dozen of the charcoal briquettes. If they are enclosed with ash, you have to scrape them to two piles and put an aluminum pan that is filled with water in between them as for adding moisture to your smoker.

And just add a little beer, Worcestershire sauce or red wine to the water, if you want to. It is crucial that you keep your ham moist if you don’t want the meat to be dried out or crusty. So, you need to keep an eye on the aluminum pan of the liquid at the bottom of the smoker and replenish once needed. Besides, you also need to baste the ham regularly like every hour. You might make a basting sauce through combining apple juice, pineapple juice, brown sugar, cloves, and Worcestershire sauce. It would also be easier if you are to use a baster to spread the liquid goodness all over the fresh ham. You also need to keep on checking the ham’s internal temperature. If it doesn’t reach at least 145 F, it is not yet done. If you are in the last half an hour of cooking, you might add a brown sugar glaze into the ham and just let its outside get crispy. Allow the ham to sit outside the smoker for around 20 minutes after it has reached the desired temperature letting the juice settles. And you might utilize a good carving knife in order to carve the ham against the grain. And for the serving process, it is up to you now. You might put the smoked ham on the table sitting on its side to allow everyone to tear off a slice. Or you might already slice them. Indeed, it is a matter of preference.

Just simply be guided by these steps or you can watch this to help you regarding how to smoke a fresh ham.

Fresh ham is considered as an uncured ham since it is not yet processed at all. But, aside from learning how to smoke a fresh ham, I will also teach you how to preserve your ham. Actually, curing a ham is not always about preservation but it is also about keeping the ham moist and providing the pink color we are all familiar with.

You have purchased a fresh ham, and you plan to smoke it. But, why not try to cure it first. With that, here’s a guide that you should also follow:

Mix up the curing brine

Though you could dry cure the ham, most of the hams are wet cured. Rather than rubbing it with sodium nitrate and salt, hams are immersed in a curing brine for almost a week. The liquid enters the ham and it will keep it moist.

For the meantime, the sodium nitrate and salt in the liquid brine will cure the meat at the same time halting harmful bacteria and turning the meat to pink color. The needed ingredients are the following: One and a half cups of kosher salt A half cup of pickling spice Boil them together with a gallon of water and allow the brine to cool completely.

Put the meat in a brining bag

A brining bag might easily fit the ham then zip up for a cleaner brine. This will also minimize the clean-up time once you’re done. For those who don’t have this kind of bag, you might use a clean water cooler or a container which is taller compared to the tallest point of your ham. Transfer the curing brine to the bag

If the curing brine is cool, you need to transfer it to the brining bag. Fill the bag with a half to one gallon of cold water to dilute the concentrated brine as well as to cover the ham. And mix them thoroughly using a long wooden spoon.

You can use a refrigerator as it is considered as the best for brining. However, a cool cellar or a basement would work too. You need to remove the ham from the fridge and inject it with the brining liquid, periodically.

Rinse the ham off under cold water

After the advised curing time, you need to rinse the ham off under a cold water as it will get rid of any salt which might have crystallized on its surface. If the ham has already been drained, you might have some paper towel then wipe off the excess liquid. Keep the ham in the fridge for even up to a month before using. Did you enjoy this tutorial? If you have something to ask or add to this article, feel free to leave your comments below. Thank you!