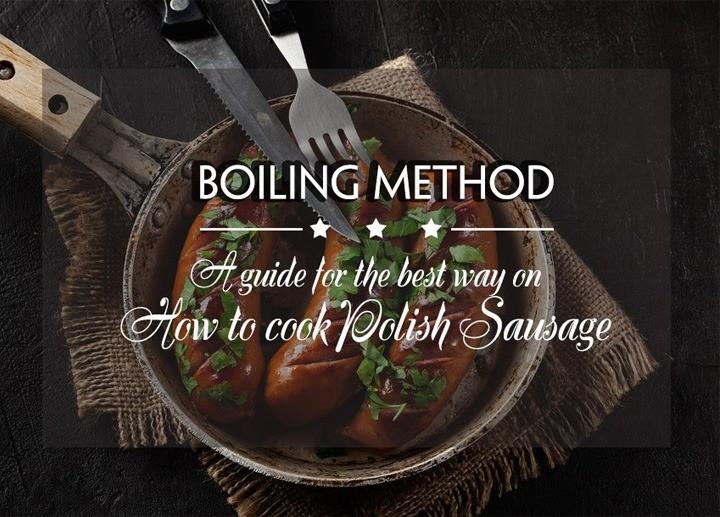 Many would recommend several methods like hot and cold, grilled, boiled, and baked. In most cases, kielbasas are also served in soups such as pea soup, cabbage soup, and sour rye soup. And there are varied ways on how you could enjoy the delightful taste that polish sausage could provide.

How To Cool Kielbasa: The Polish Sausage Cooking Guide
But first, what is a polish sausage?
Things Needed
So, How to Cook Polish Sausage?
Essential Tips to Consider
Final Thoughts

But first, what is a Polish Sausage?

Polish sausage or sometimes referred as kielbasa is known as a thick sausage which comes in long links. Traditionally, it is made with pork but could also be available in beef. Generally, it offers mellow flavor making it as a very versatile ingredient once lightly-spiced along with pepper and garlic. In most cases, kielbasas are sold pre-cooked or smoked however some meat markets would offer fresh varieties. If you are to boil or bake the kielbasa, it will bring out the texture and the flavor of the meat. Boiling it first will also help in warming the inside and enhancing the flavor with liquids like beer. And finally, these long sausages could be baked lightly as for making the skin crispy and giving it’s outside a golden hue. This one is optional because some would like to brown the meat first before boiling to add a bit of flavor. A non-stick frying pan could be a great choice. You are to boil a large amount of meat, so a large pot is also required. This will accommodate both the meat and the water you will add. You might need a half of bay leaf, garlic, marjoram, mustard seeds, peppercorns, and onion. You should be prepared with these items as you go through the process of cooking the polish sausage.

Should You Boil Or Grill Polish Kielbasa?

Though there are numbers of methods when it comes to cooking polish sausage, boiling method seems to be the easiest and the best option to ever consider. This method could also be great for those beginners aiming to get the best out of kielbasas.

For the best way of cooking polish sausage, consider the following:

Polish sausages would come frozen so make sure to thaw it first properly. Don’t consider thawing frozen meat through the process. It might produce a slimy and mushy result, but it might also be undercooked or would lead to food poisoning. Boiling the sausage could be done in different ways. This would include the use of frying pan or pot. For beginners, use a pot and just boil the contents. Deglazing frying pan with a beer could also be considered. This one is considered to be optional. Once using a frying pan in searing the meat, bring the pan up to the medium heat. For a quicker sear, add butter. You should not overcook the meat instead simply get a good brown on the outside adding flavor. This step could also be done in the pot but deglazing it properly with the beer should as well be considered. Another optional step to consider. This is the process of recovering the flavor of all the burned bits right from the bottom of the frying pan. The process is also associated with wine, but the use of beer is also recommended.

The beer would add a flavor and will take up the flavors of the burned bits. Add few splashes of beer as this will soften the burned bits allowing you to loosen them using a spatula. For those that are losing the water-only method, there is just a need to take the water along with the seasonings and then drop them into the pot. You will bring the contents to the boil and add the polish sausage as well as the onions.

After that, cover the pot and let it boil for almost 45 to 50 minutes. For those that are using beer, there is a need to be attentive since the beer would tend to reduce once it cooks. The process will just be the same as the regular boiling method, but you will add beer than of water. Once merely boiling the polish sausage in the water, there is nothing much to do. Just remove the sausages and put them on the plate which has a paper towel on it as for soaking up any excess beer or water.

And for any meat, let it rest to allow the juices to settle down and also the post-cook process to take hold. On the other hand, once using beer methods, you want to remove the contents as for deeper serving dish. Just place the meat in the dish, and you might use a ladle in pouring some of the liquid on top of the meat. You could also add onions into this dish. You could serve polish sausage with steamed or cooked cabbage for a delightful taste. It could also go well with dumplings or mashed potatoes. Polish sausage will taste good along with starchy food. And with regards to drink pairings, beer is the right pair. Indeed, pork and beer are great and natural compliments when it comes to most diners’ palates.

See? The best way on how to cook polish sausage could be so simple and easy to follow. With this guide, you will come up with the best dish of this best sausage. A Few Essential Tips to Consider

As an additional help, being guided by numbers of important tips should be considered. Here are some of the best tips to ever consider as you cook polish sausage:

This would completely defeat the goal of boiling the cased meat. Some people might slice or pierce the sausages prior to serving as for encouraging them to cook or to check if they are already fully cooked. You should not do this! If the casing is pierced, the sausage will leach to the water, therefore, would leave the sausage to be dry and also less in flavor. In most cases, darker beers are a great choice. Most people would use Guinness or the stout which is close to it. Darker beers would have stronger flavors, and also a stout or a Guinness would have higher fat content. With this, the liquid will have greater density and could be handy once you want to take the dish further.

Don't Worry About The Broken Skin

This would happen once stuffing swells from the heat as well as break the casing. It is nothing to be worried about, and it also doesn’t indicate that the sausage is bad.

You might as well consider adding some other ingredients to the pot as the sausages boil intended for a kick of flavor. Like for instance, toss the sausages to the water with onions, tomato sauce, and garlic for an Italian twist.

Being guided by these tips could help you come up with the most delightful polish sausage ever.

For beginners, there is a need to consider beginning with a simple method. But still, we cannot deny the fact that this kind of sausage is a versatile meat which could be cooked in many ways making this as one of the reasons why it is at its peak of popularity. You might consider watching this if you plan on making a polish sausage.