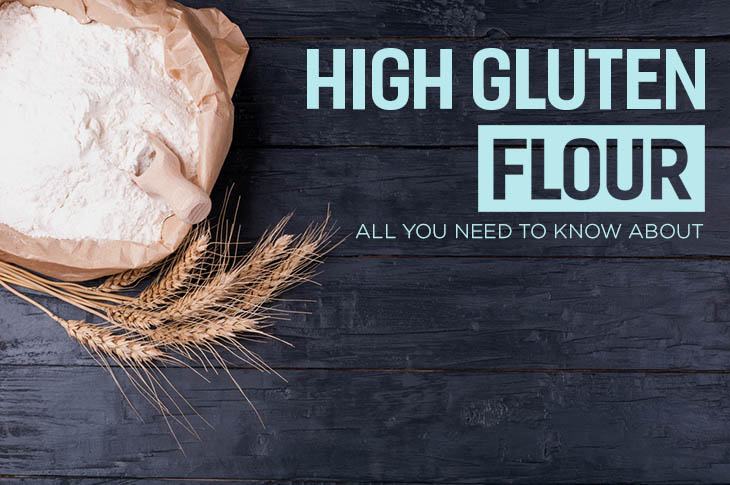 Do you love baking? Are you among those people out there who enjoy doing certain baking recipes? If yes, then you should also be aware of the baking ingredients you are using, particularly the use of high gluten flour. Knowing essential things about flour is a great help during your baking process making you come up with the delightful baked goods.

First Of All - What Is Gluten Exactly? Gluten, or known as the combination of proteins in wheat flour, absorbs liquid as to form elastic strands which capture steam as well as the carbon dioxide that is created by the yeast, therefore, helping baked goods to rise. This one also helps in making those baked products a lot chewier. But which one should you consider, the high gluten flour or the lower one? Well, many prefer the former than the latter so let us learn more about this said gluten flour.

What Is High Gluten Flour?

High gluten flour has a lot more of gluten compared with bread flour having 13% to 14.5% of gluten every serving that is a lot higher than the all-purpose bread flour. Gluten contains 75% to 80% of protein that is naturally found in almost all wheat flours. Commonly used for baking, this kind of gluten flour is not as common as the all-purpose flour and could also be a bit harder to be found in most local grocery stores. It is as well most of the time used for diabetic breads as well as artisan breads or being mixed with other low-gluten or low-protein flours. Simply said, high gluten flour is something that is high in protein.

What Can You Use High Gluten Flour For?

Most commercial bakeries would use this gluten flour as to create chewy baked goods including pizza crusts, bagels, and artisan pieces of bread. They would also combine this one with the low gluten flours as for making products like rye bread a lot lighter. Gluten is also used in helping pieces of bread to develop a lot richer flavor. It also offers shaped to the baked goods.

Where To Get It?

Due to the fact that most home bakers are not using such kind of flour most of the time, it might be hard to find this one in a regular grocery store. But, don’t worry since you could make a special order of it from some stores which sell baking ingredients. Or you might simply use bread flour that is widely available on the market today. It is also made from hard and high protein wheat and also has a protein content which averages from 12% to 13%. Indeed, protein is needed by one’s body as for building and repairing cells and making it a lot more important for healthy growth of the body. And this flour is indeed rich with high protein, which makes it so beneficial.

It is a good source of folic acid and this folic acid the same with niacin will help the body to process and use energy. And it is also important for both emotional and mental health. It also supports brain function as well as important for the RNA and DNA production.

Flours having more gluten also have more niacin. This would aid in the production of hormones that are related to stress and sex and it also helps the body in terms of processing and using energy.

These are some of the benefits that high gluten flour might provide to those that would consider the use of it.

High gluten flour is technically high in protein and is prepared through removing the starch content while the low gluten flour is known to be high in starch but low in protein. So, with that, the former is mainly used in order to make a low-calorie bread perfect for those that are losing weight. Apart from that, high gluten flour would also have more strength as well as elasticity compared to low gluten flour. It is the reason why it is ideal for numbers of baking recipes requiring the dough to rise and also retain the gas or air once baking. This kind of flour also has this ability to make the baked food spongy and soft. The wheat kernel has its three main parts. The smallest portion of the kernel is the germ and is filled with minerals, vitamins, and fats. It is being removed from the white flour during the milling process. Next, the bran would comprise the 14.5% of the kernel. It is the protective and tough outer coating that is also removed only for the white flour however it is being retained for the whole-wheat flour. This would give a lot of fiber.

And finally, the endosperm would make up about 82% of the kernel and is made up of protein and starches providing gluten being used for the structures of the baked goods. So, what is the difference between all-purpose flour and high gluten flour?

The former one is considered as the most common flour used by the majority. It is known as the combination of both soft and hard wheat. It normally contains about 8% to 11% of gluten which is the predominant protein found in wheat flour. This kind of flour is usually bleached or unbleached. The bleached one is chemically treated and would have less protein than the unbleached one. It is also ideal for waffles, quick pieces of bread, pancakes, cookies and pie crusts. And the unbleached flour is most of the time used for pastries and yeast bread including cream puffs, éclairs, strudel and puff pastries. Vital wheat gluten or gluten flour is very popular as used for numbers of baking recipes including pizza as well as bagel dough. The gliad﻿in﻿﻿ an﻿﻿d glutenin which are two long strand proteins making up the gluten will create elastic bonds once mixed together. The said elasticity is important as for forming and rising of the dough.

For those home bakers, it could be simple to make high gluten flour just by adding gluten or the vital wheat gluten to the regular flour. But, it is also important that you follow some measurement rules making the process perfect. Some tips to consider are as follow: Another low gluten flour includes whole wheat flour and rye flour. So, once baking with these flours, adding high gluten flour is important in order to develop elasticity in the dough. Just 3 teaspoons of vital wheat gluten to a cup of wheat flour or rye flour. Mix them together and proceed with the recipe.

If you love baking, then being familiar with high gluten flour will help you a lot. With that, share us your thoughts about the discussed topic. We will be very happy to read your comments!