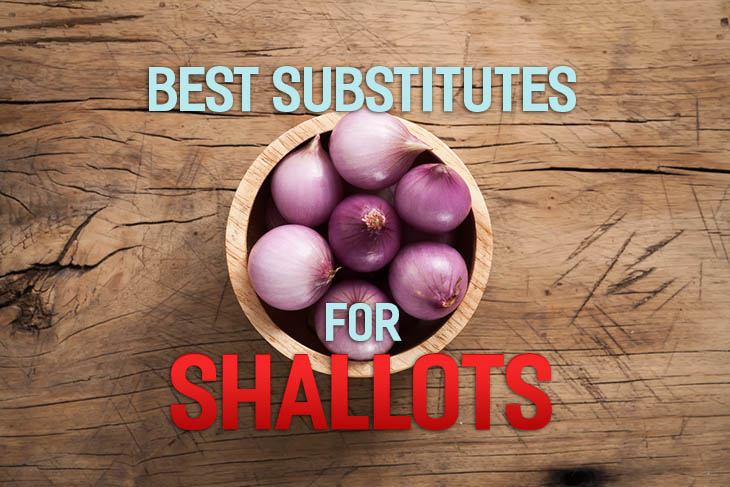 One of the best ways in order to come up with such a delightful recipe is to add certain spice into it. So, this is the reason as to why having certain spices in the kitchen should always be considered. Shallot is one of the spices that you must have in your kitchen. There are certain recipes that indeed call for a need of this said spice but if you have nothing available right on hand, which one is the best substitute for shallots.

Also known as eschalots, shallots are slender, long and underground fleshy stems from the Allium family of tunicate bulb vegetables. They generally differ from the onions due to being a lot smaller and also grow in clusters of bulbs from every plant-root system. These bulbs are characterized as less pungent compared with the garlic and onions making them as one of the favorite ingredients in the kitchen. Central Asian region is the origin of this spice and today it is being cultivated as the major commercial crop in almost all continents. It looks like the other bulb and stem vegetables belonging to Alliaceae family.

In addition, shallots are also cool perennials but these could also be grown as annual crops the same with onions. Employing ready-made sets is considered as the quickest way in order to grow them. This plant would reach about 50 cm in height and it would bear 1-5 cloves of bulblets under the soil surface.

It would also take about 100 days for the crop wherein the bulbs could now be ready for harvesting. Those mature bulbs are then cured under the dry air and being stored in the same way as how onions are stored.

The Health Benefits Of Shallots Being a petite member of the Allium plant family, shallots go together with onions, chives, and garlic. They are referred as mild-flavored ornamental vegetables that are favorite by most chefs all over the world. Aside from that, they are valued as well because of the health and healing properties they provide. You can indeed make shallots as a great addition to any meal plan due to the nutritional health benefits they could offer including the following:

There will be a reduced rate when it comes to overall cancers if diets are high in allium vegetables such as shallots. The said vegetables would have flavonoids, also referred as bioflavonoids that are plant pigments protecting the cells from damage because of their powerful antioxidant properties.

Shallots indeed offer health benefits for those who are too conscious about their weight as well as saturated-fat intake. Raw shallots, serve in 100 grams, would contain only 72 calories and 0.10 grams of total fat including only 0.17 grams of the saturated fat. Healthful mineral potassium could also be provided by shallots supporting many functions of the body. For a 3.5 ounce raw shallots serving it will contain 334 milligrams of potassium. This potassium indeed helps the body in maintaining a steady heartbeat as well as fluid balance.

It also plays a great role in terms of activating the enzymes in protein and carbohydrate metabolism. And also, it is important to proper nerve cell firing, kidney function, and muscle contraction.

Shallots offer 34 micrograms of folate. This folate also referred as folic acid, is one of the eight B Vitamins. This one is important for brain function and would contribute to the emotional and mental health. Folate also has its great role in the production of the RNA and DNA of the body and cell development as well. It also a great protection against spine and brain birth defects once taken early in pregnancy.

Those are among the health benefits that shallots could provide once included in any recipe where it suits well.

How To Choose And Store Shallots?

During spring as well as early summer season, fresh shallots could be readily available. Humid and wet conditions would hamper the flavor and also the storage life. In most supermarkets, you could also choose from canned, frozen, fresh, powdered, dehydrated and pickled shallots. If you are buying fresh produce, there is a need to look for well-developed, uniform and clean bulbs along with thin, dry and coppery-brown outer scale. The same with onions, there is a need to avoid those which show sprouting or some signs of black mold indicating old stock. And in addition, poor quality bulbs would most of the time be inflicted by soft spots, dark patches and a moisture at the neck, all are indications of decaying.

Shallots also perish a lot earlier than onions. Once at home, store these shallots in a cool and dark place away from moisture as well as humid conditions wherein they remain to be fresh for numbers of days. They might also keep well in the refrigerator but you must use them once you remove them from the fridge because they tend to spoil soon once kept at room temperature.

What Are The Best Substitutes For Shallots?

Being from the onion family, shallots don’t taste as strong as some other varieties however they have a hint of garlic. There are recipes wherein you need shallots, but if you have run out of supply, onions and some other substitutes could be considered. Due to the close relationship between the shallots and some other substitutes, you could often replace in the exact amount as needed for in the recipe having not to affect the food’s consistency. Since shallots have their mild flavor, you might consider the use of sweet onions. Those small white pearl onions could also work well as substitutes. Simply add a pinch of garlic powder and you could mimic the flavor of shallot. However, garlic could be a lot stronger compared to shallots so don’t add too much of it. Once you prefer using fresh garlic, simply crush a clove in the garlic press and add the liquid that comes out. These ones are the same with green onions only that they have long and twisting tails as well as taste somewhere between onions and garlic. They are as well a lot firmer compared to green onions and while the onion flavor is mild, a little could go a long way.

Once you use these herbs as alternatives for shallots, cut back the needed amount by about ¼ as for avoiding the overpowering of other flavors. But for those who really love the flavor of onion and garlic, adding full amount might be considered. Scallions, or also known as green onions, are indeed mild enough as a great substitute for the shallot. The flavor doesn’t need the addition of garlic just to add a rich and full flavor to the recipe. You might only use tops and not the bulbs of these ones and add them as late as possible in the cooking process since they could be easily overcooked. And also, leeks would share many properties along with green onions so you could use them as great alternatives. But tops only should be considered. These options might take a lot longer to cook compared with green onions so simply add them into the recipe a lot earlier or pre-soften them through sautéing over medium heat one the recipes need adding of shallots near the end of the cooking process.

The said sulphur compounds go through a certain series of chemical changes during the cutting process which could cause your eyes to water. You might reduce the effects of the sulphur compound through soaking trimmed bulbs in cold water for around a few minutes prior to chopping.

Indeed, shallots play a great role to numbers of chefs all over the world and even to those simple cooking enthusiasts right in their kitchen. So, having the best substitute for shallots must always be considered. Learning essential things about shallots is also very important. And there are numbers of other options to consider once looking for shallot substitutes. Simply choose the one that would give you the flavor of shallot.